Santa Coloma is located in a unique area that has much to offer beyond the iconic circular bell tower of its Romanesque church. The “Heritage Arc” route will unveil, throughout its five kilometres of rural tracks and paths, its hidden gems, taking you back in time no less than twelve thousand years!

In addition to the church—the crown jewel of Andorran Romanesque architecture—, you'll also get the chance to visit the town of Santa Coloma. As you walk along its streets, you'll see a number of traditional buildings that have been preserved to this day, such as the Riberaygua house—noteworthy for its heritage value—, which takes visitors back to 18th century rural Andorra.

If you look upward, above the village, you'll see Roc d'Enclar, which overlooks the entrance to the valley. This hill is like an open book that explains the history and evolution of Andorra.  From the valley you can easily spot the fortified church of Sant Vincent d'Enclar, the oldest temple in the country, built by the Count of Foix in 1288. The remains that have been unearthed on the hill throughout the course of several archaeological campaigns and during the redevelopment carried out in the 80s have confirmed that it was a strategic surveillance and control area that was permanently inhabited for centuries. Within this archaeological ensemble there is also an important necropolis containing tombs dating from the 9th to the 12th centuries. The visit to the necropolis is not encompassed within the main “Heritage Arc” route. Getting there requires an extra effort, as it can only be reached on foot.

Beyond the town, on the way to La Margineda, you'll see the Torre dels Russos, a modernist, single-family home designed by the renowned Catalan architect Cèsar Martinell at the start of the 20th century, commissioned by Nicolai Popov, a refugee who settled down in the Principality. This unique building was, indirectly, at the centre of one of the most picturesque episodes of the country's recent history—the reign of Boris I of Andorra, from 8 to 24 July 1934. Boris Skóssirev, the real name of the individual that tried to turn Andorra into a monarchic state, lived there for some time. The house's current name, as it's popularly known, stems from those very events.

The “Heritage Arc” route continues until the Roureda de la Margineda archaeological site. It is one of the most important archaeological sites studied to date, in Andorra and the southern Pyrenees alike. Since 2012, thanks to a collaboration between private organisations and public administrations, this archaeological site has been open to the public. In 2017, it served as the setting for Andosinoi, the 1st Historical Re-enactment Festival of Andorra.

At the south end of the “Heritage Arc” you'll find one of the lesser-known sites of Andorra's heritage, the Balma de la Margineda grotto. It's one of the most important prehistoric sites in Andorra and all of the Pyrenees. Discovered in 1959, it attests to the presence of Andorra's first settlers, dating from the Epipaleolithic age (10,000 BC) to the Neolithic age (5,000–4,000 BC).

On the way back, the Balma route passes by the new Margineda bridge. This medieval bridge is one of the most iconic and widely-photographed elements of Andorra's architectural heritage. Built between the late 14th century and early 15th century, its length and stylish shapes are particularly noteworthy. Next to the bridge there's a viewpoint from where visitors can marvel at the natural landscape surrounding the area. In the middle of the roundabout, enclosing the ensemble, stands the sculpture, designed by Valencian artist Andreu Alfaro, that commemorates the very first Conference of Catalan Language and Literature, held in 1906.

Behind this point of interest you'll find the Madrid Bridge, a modern construction that contrasts with the other sites and locations comprising this cultural and natural itinerary.

Information and bookings
The Santa Coloma and La Margineda “Heritage Arc” route is open all-year-round.
In July and August the route is a guided visit with limited places costing €3. Prior reservation is required.
Andorra la Vella Tourist Office
Tel.: (+376) 750 100
info@oficinaturisme.ad 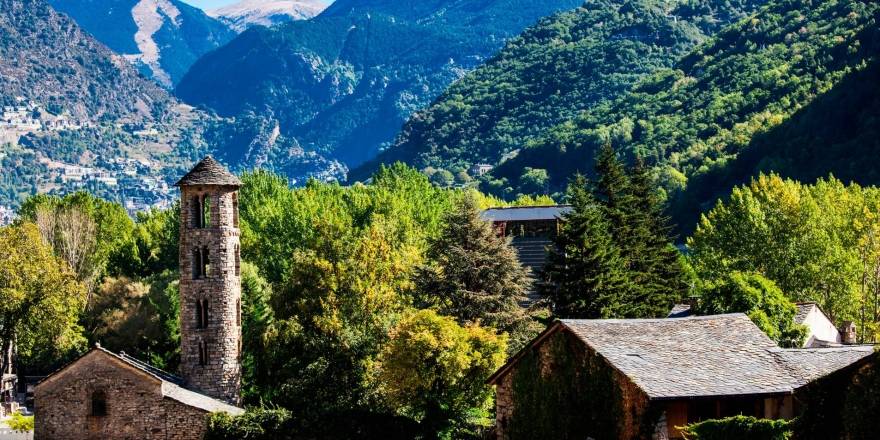