CULTURE > Walking through the historic centre of Andorra la Vella

WALKING THROUGH THE HISTORIC CENTRE OF ANDORRA LA VELLA

There you’ll learn about the birth of Andorra’s political system, traditional Andorran architecture and endless other curiosities. Ready?

We are right in the heart of Andorra la Vella, starting our walk at Plaza Príncep Benlloch, just at the beginning of the capital’s historic centre. You’ll see before you two buildings —although originally there were three— built in modern and medieval style: the city hall with the rectory and the dungeon, and the Church of Sant Esteve.

The Council building is the city government headquarters in the capital and was built in the early 20th century. Although you are looking at a modern building, today’s Councils originated in the assemblies of heads of families that took place regularly since the feudal times. The rights and responsibilities of the Council included addressing the basic aspects of the Parish’s economic and social life, such as controlling natural resources, managing pasturelands and farmlands, and keeping roads in good condition. The Councillors were named as the maximum representatives of this assembly.

Facing the Council building is the Church of Sant Esteve. It was built in medieval times and features a variety of architectural styles. It has many curiosities to discover, including the semi-circular Romanesque apse, the largest of its kind in all the Principality’s Romanesque churches.

At this point you will have noticed that between the church and the Council building a small window pokes out, offering a glimpse into an underground area. It is a former medieval dungeon that dates back to the 16th or 17th centuries.  Inside it is 2 m2 and 9 m2 deep. It is built fully from stone, revealing a piece of protruding rock and a part of the cobbled vault that covered it. The Dungeon is a good example of civil architecture and was used to imprison delinquents who committed minor misdeeds.

As you get deeper into the historic centre, you’ll discover the charm of the Andorra of yesteryear with its cobbled streets and its houses and other buildings that preserve their original structure. It’s the perfect place to enjoy a moment of rest, get a bite to eat or take photos. You’ll feel like you travelled back in time!

During your walk you’ll encounter some very important sculptures, including the “Ball de Contrapás”: a cement and marble work of Andorran sculptor Sergi Mas from 1977. This monument recalls the typical Andorran folk dance in which all participants must hold hands and follow the instructions of the “cap de ball” or the leader of the dance.

A few metres in front of you is the Plaza del Consell, home to the smallest parliament in Europe: Casa de la Vall! This iconic building dates back to the year 1580. It was built as an ancestral home and defensive tower for the Busquets family, and was ultimately acquired by the then Consell de la Terra in 1702 to become the permanent headquarters of the Consell General or parliament of Andorra.  As an institution it has been a key part of Andorran life, for preserving the country’s independence. Its functions evolved over the course of nearly seven centuries up to the adoption of Andorra’s Constitution in 1993 via referendum. The Casa de la Vall was in use until the year 2011. The same plaza is home to the new Andorran Parliament building with 28 seats representing all Andorran men and women.

Stunning views from the plaza

Once you are outside don’t miss the magnificent views from the plaza. You’ll not only get a spectacular view of Andorra but can also enjoy another work of art: 7 poets, Barcelona sculptor Jaume Plensa's ode to the 7 parishes of Andorra. At dusk the thinkers in the sculpture come to life, lighting up with thousands of colours and giving you a spectacular tableau of the city centre.

To finish off this fun afternoon of walking and discovering all the curiosities of this historic centre, it’s time to disconnect and pamper your other senses. We suggest doing so at Era Bauró: it's a restaurant where you can enjoy the country’s traditional cuisine, selecting from its dinner menu or trying some of its delicious tapas! Make sure not to leave without trying the beer, brewed right in the restaurant, where you can see the process of making one of the country's best beers.

To get to the restaurant you’ll walk by the Cisco de Sans house, a hotel that was one of the first establishments to open its doors in the late 19th century. The architecture of the building and its location give us an idea of what the travellers were like back then and how they came to stay at this beloved inn.

Discover the historic centre of Andorra la Vella and soak up its history with this cultural walking tour. 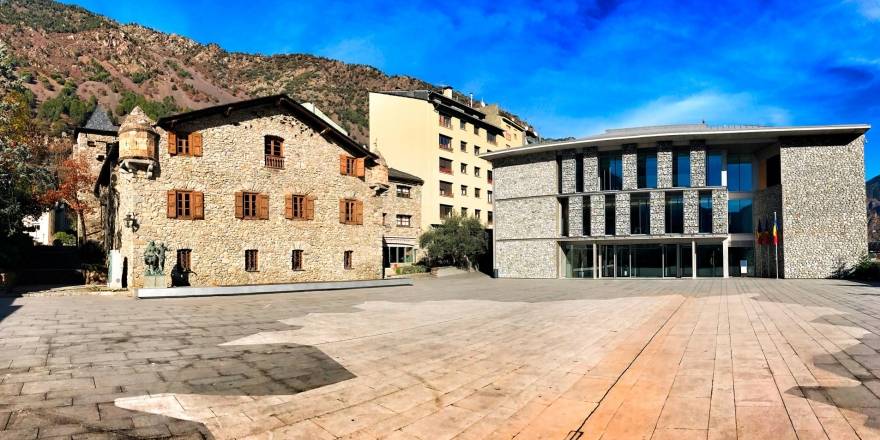