Some history
The frescos, painted by the Master of Santa Coloma in the twelfth century, were kept in the apse of the church until the beginning of the twentieth century when the fashion for the Romanic gave rise to the sale of many frescos in the Pyrenees. The frescos from the apse of Santa Coloma – taken down by strappo— it was sold in 1933 to a Barcelona antique dealer, who then sold most of it to a German aristocrat of Jewish origin, Baron Van Cassel.

With the outbreak of the Second World War, the pictures fell into the hands of the Third Reich. Later, after the war, they were moved to the Collecting Point in Munich. From there they went to the Prussian State Culture Museum in Berlin in 1969, where they stayed for 20 years without being exhibited. 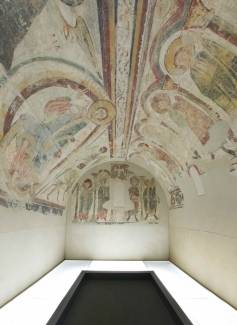