CULTURE > Cross of the 7 arms

This is an ancient cross that is the object of a tragic legend... Legend has it that in the village of Prats there was a rather fearful lad who trembled just at the thought that the devil might come at some time. The youngsters in the village had the bad idea of sending him to Canillo to look for wine in exchange for inviting him to lunch. As he didn’t want to go, and to stop him being frightened, they gave him a gun and sent him to Canillo.

It was getting dark as he reached Canillo. He went to collect the wine and as there were a lot of people, he left the gun and the skin and went for a stroll around the village. When the innkeeper had attended all of the customers, he drank the boy’s wine and had a curious look at the weapon, seeing that it was badly loaded. Thinking that it was a mistake he loaded it properly in case, he thought, the owner of the gun had to defend himself from an animal and the weapon failed to work.

The boy collected the skin and the gun and went on his way back to Prats. Meanwhile, his friends had got ready a surprise for him... Suddenly a white shape appeared in the middle of his path. The lad didn’t think twice, he shot and ran off home saying that he had killed the devil. The rest of the boys laughed at him and told him to go back to the place to see the dead devil. When they got there, they found that their friend had disappeared and that the devil had taken him away. They had been punished for their wickedness.

In the place where this story took place, it was decided to set up a cross so that travellers might not forget the consequences of such a wicked act. The cross had seven arms, just like there were seven lads who wanted to laugh at their friend. One of them disappeared, and by strange coincidence the cross also lost one of its arms. 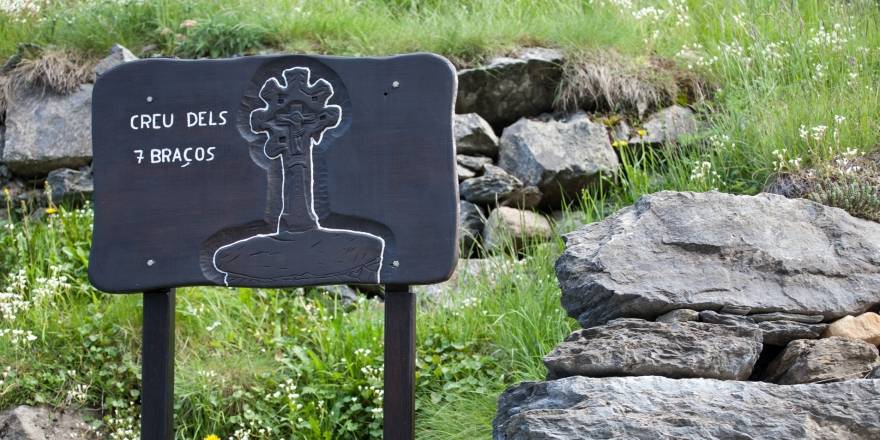