It is Romanesque in origin with different later modifications made in the 17th and 20th centuries. The 23 metre bell tower of Santa Eulalia d’Encamp was added to the church in the second half of the 11th century. It is the tallest of its kind in the Lombard Romanesque style in the country at 3 storeys and features a wrought iron cross on coarse base on its roof.

The original Romanesque apse was demolished in 1924. The porch dates back to the 14th century. Highlights inside include the Romanesque baptismal font decorated with arches and fleurs-de-lis, 3 Baroque altarpieces from the 17th and 18th centuries, and the modern-day stained-glass window by Encamp artist Agustí Rios. The church of Santa Eulalia de Encamp preserves the principality’s oldest porch, and next to it is the conjuratory, a small building full of religious symbolism where the Consell del Comú was held. It is one of the few still standing in the country, and is used for ceremonies to seek refuge and protection from storms and downpours.

The Bohigas-Martorell-MacKay architecture firm led the restoration works carried out in 1988 to 1989 and designed a square connecting with the extension of the nave and widening the structure of the building. It was one of the largest renovations that has been undertaken.

The Holy Art Museum in an annexe building contains different liturgical objects, some found during the refurbishment work, such as a Romanesque wrought iron candelabra, a bronze thurible from the 14th century, a vera crucis from 1571, a Gothic cassock and a parchment with musical notations, as well as a faxed copy of one of the copies of the mediaeval Codex Beatus de Liébana, with exceptional quality illuminated miniatures. 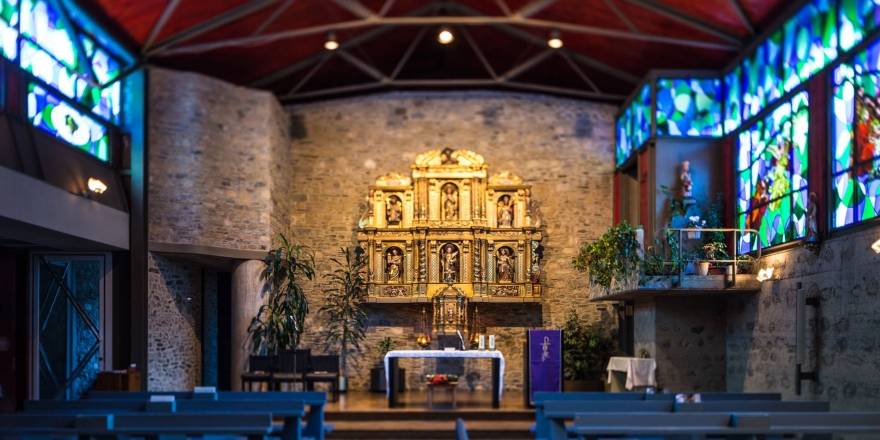