The Church of Santa Coloma is one of the oldest in Andorra. Dating to the pre-Romanesque period, it was built between the 8th and 9th centuries and has a rectangular nave and quadrangular apse. Its current appearance comes from the refurbishment carried out during the 12th century, when the four-storey Lombard-style circular bell tower was added. It is only one in Andorra and one of the few found in the Pyrenees. The entirety of the church’s chancel was decorated with a series of fresco murals that have traditionally been attributed to the Master of Santa Coloma, although they are not the work of just one person. This occurs with many of the Romanesque murals in Andorra and the Pyrenees: they are the works of nomadic painter workshops that received the same training, which has led experts to talk about schools such as the one in this case, of the Master of Santa Coloma.

In the church, which should be visited together with «Espai Columba», you can only see a few of the original frescos, as they were sold in 1933. The pictorial ensemble was recovered by the Government of Andorra in 2007. The alterations suffered both by the paintings and the apse over the years means it is impossible for them to be returned to their original location.

Now, through the use of new technology, we can enjoy the paintings in their original location thanks to video mapping. This virtual recreation, accompanied by light and sound, projects the murals onto their respective locations with total accuracy, allowing visitors to experience the sensations that the frescos would have originally evoked. A total of six projectors recreate the series of paintings on the walls of the nave and inside the apse. The projection lasts six minutes and can be seen in small groups of up to 10 people, to guarantee the quality of the virtual experience.

The video mapping can only be seen in conjunction with a visit to «Espai Columba», near the church, where you can see the original paintings.

Its location gives us a chance to enjoy the old village of Santa Coloma, and the Russians’ Tower which, planned by César Martinell, is one of the examples of granite architecture in Andorra. Very nearby is the little church of Sant Vicenç, very interesting to complete the whole tour.

You will find all the information on times and visits at the «Espai Columba».

The church can be visited on Andorra Tourist Bus route 2, from June to September. More information: Tourist Office of Andorra la Vella.

Image of the video mapping of the Romanesque paintings 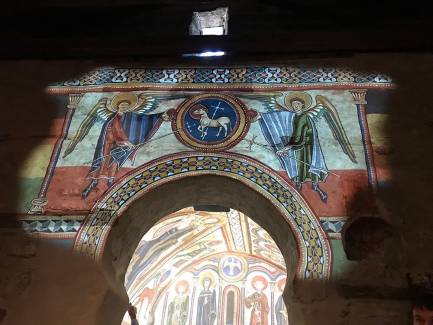 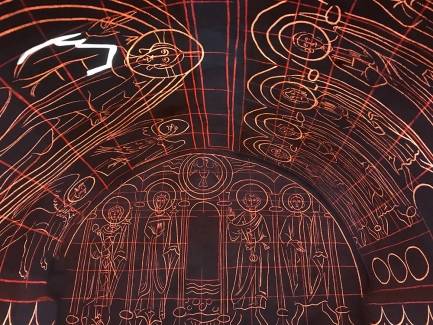 Exterior panorama of the church