This highly privileged alpine location, at 1,635 metres of elevation and difficult to access, would let pilgrims show their devotion to the Virgin of Canòlich by ascending to the sanctuary to worship her and participate in the church’s religious events.

The present building dates back to the early 20th century, but there are references that indicate that Canòlich existed in mediaeval times (1176). The Manual Digest de les Valls Neutras de Andorra (1745 – a compilation of the history, government and uses and customs of Andorra, a work by the illustrious episcopal vaguer, doctor in law and lawyer of Andorra Antoni Fiter and Rossell) mentions “Na. Sra. de Canòlich” as one of the three main sanctuaries in the valleys of Andorra, along with Meritxell (Canillo) and Sant Antoni de la Grella (La Massana). Everything points to the present Canòlich sanctuary being built on the foundations of an ancient Romanesque construction, as the image of the virgin corresponds to the 12th century. This Romanesque bust was crowned by the Vatican in 1999 and is now in the parish church of Sant Julià i Sant Germà, in the town of Sant Julià de Lòria. The sanctuary preserves an 18th-century baroque altarpiece and some ceramic murals by the artist Mas.

Guided visits from mid-June to mid-September. You must book 15 days beforehand at the Sant Julià de Lòria Tourist Office. You can also visit it on your own if you prefer, as it is free to enter.

On the last Saturday of every May, this sanctuary celebrates the popular “Canolich gathering”, undoubtedly the biggest religious event, bringing together numerous visitors year after year. The gathering promotes generosity and sharing among all pilgrims who come there. 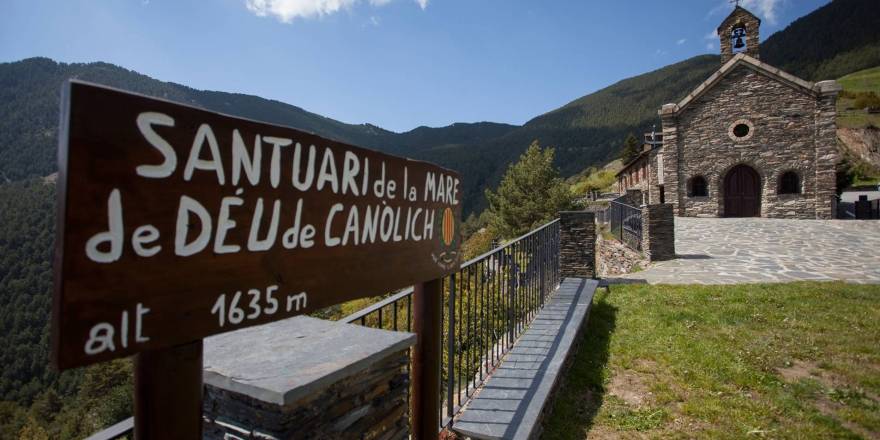