History, beauty, political importance... There are lots of reasons that make Casa de la Vall one of the most symbolic monuments in Andorra, if not the most. It’s located in the heart of the old town of Andorra la Vella and can be visited. Here’s description of the most important parts of its history, as well as the most interesting parts of its interior and exterior.

Casa de la Vall was built in the late 16th century as a manor house for the Busquets family, on a rock overlooking the valley of the River Valira. In 1702, its purpose changed: it was acquired by the Consell General, the Parliament of Andorra, and used as its headquarters until 2011. Representatives of the country’s parishes convened there, and it also acted as the seat of justice. In 1962, it underwent a major renovation to improve its physical condition, gave a sense of unity to the building, while also providing it with a better main session room. In 2011, the Consell General moved to a new building, also in Andorra la Vella.

What is there to see inside and outside?

Casa de la Vall offers some interesting rooms and surprises for visitors: in terms of its architecture, you can observe its quadrangular floor plan and three galleries, typical of stately homes. Its interior is divided between the ground floor and two upper floors. The ground floor is home to the spectacular Criminal Court, with wooden furniture and decorations. The first floor is where you’ll find the Hall of Lost Steps, a noble room with the original wall paintings dating back to the 16th century. This floor is also home to the main session room and the kitchens, as well as other symbolic elements of the building. The bell, for example, was used to call parliamentarians to session, and the mysterious Cabinet of Seven Keys, where important documents on the history of the Principality are kept, such as the Manual Digestion the history, government and customs of Andorra in the mid-18th century. The second floor, the old attic area, has been renovated to serve as a multi-purpose hall.

On the outside, you’ll find a square where you can take in the dovecote and façades of the building, with traditional lime and sandstone mortar. The gabled rooftop is made from slate and the main entrance has granite keystones. The square also features recent sculptures depicting some of the most important episodes in the history of Andorra, such as the signing of the Pariatgeor the constitutional referendum of 1993. The main façade depicts the coat of arms of the Busquets family and the traditional coat of arms of the Principality, with the slogan: “Virtus, Unita, Fortior” (United virtue is stronger).

How to visit Casa de la Vall in Andorra:

To visit Casa de Vall, you’ll need to buy a ticket for €5 (50% of discount with Passmuseu) in the building’s reception. You can do a self-led tour using an audio guide or, if you prefer, you can also request a guided tour (for a €1.50 supplement). You'll need to book in advance over the phone or by e-mail for a guided tour. Given the age of the building, its structure is not equipped for people with reduced mobility.

For more information on opening times and holidays, you can check the official website. 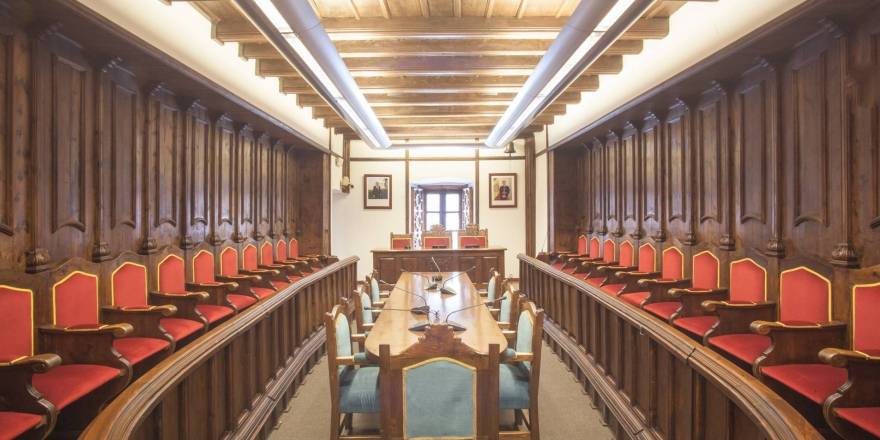