Stop the passing of time and enjoy the numerous contemporary sculptures scattered around the centre. Andorra la Vella provides you with several monuments that will take you to a world of imagination, traditional dance, peace and relaxation.

A sculpture formed by seven human figures referring to the “stylists” of Constantinople and which can be seen as a metaphor of the seven Andorran parishes.

Standing in Plaça Lídia Armengol in Andorra la Vella, the 7 poets seek an image of peace and reflection in the midst of the bustling city.

This is a monumental work in bronze, weighing 1,400 kilograms and rising 4.90 metres, 1.70 m deep and 2.60 m long.  It belongs to a series created by Dalí and symbolises the passing of time.

The clock is on a tree trunk and has a crown that represents how time dominates over humanity.

It was initially given to the Government of Andorra by the art collector and confident of Dalí, Enric Sabater, in 1999. However, in 2010, it was taken to its present location in Plaça de la Rotonda when it was given to the Commune of Andorra la Vella.

Although the best known sculptures are those mentioned above, we cannot forget others that are equally important and of great cultural value, including Mobili by Miquel Barceló, the Doble Imatge (Seeing Double) by Manolo Valdés, the Robot en Suspensió (Robot in Suspension) by Van Hoeydonk or Overflow by Jaume Plensa, among others. It is worth noting, however, that all of them are located in the same parish (Andorra la Vella).

Take a stroll around the capital and discover them! 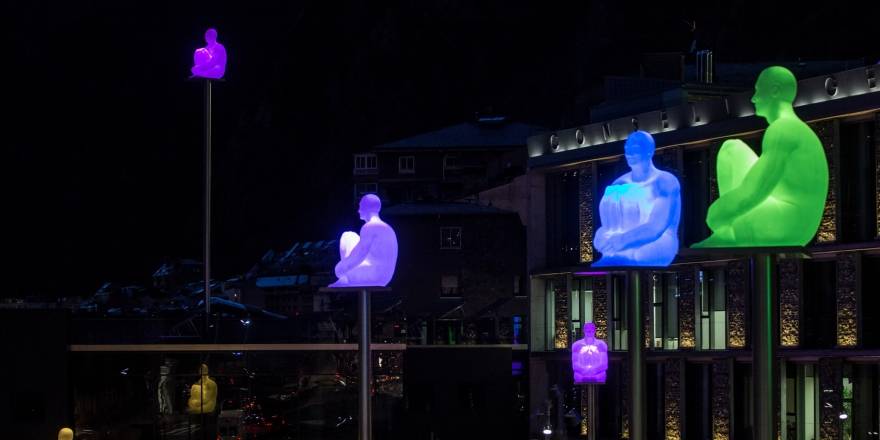