Would you like a fascinating outing filled with culture, history and fun? If so, this is the outing for you! With a total of 7 stops, you’ll be fascinated by the past of the oldest and most characteristic populations in Andorra: with just under 3000 inhabitants, Santa Coloma is home to some of the most important monuments in the country.

In the centre of the village of Santa Coloma, you find yourself in front of one of the most iconic and unique pre-Romanesque churches in the country. Built between the 8th and 9th centuries, Santa Coloma church is known above all for its four-storey high Lombard bell tower with a circular floor plan, unique to the Principality and one of the few remaining examples in the Pyrenees.

The appeal of this church does not end there, however, as there’s yet another intriguing surprise inside! Inside, you can not only observe traces of frescoes painted by the master Santa Coloma - removed using the Strappo technique in the 1930s - but you can also see the full picture with video mapping! With an audiovisual projection lasting 6 minutes, you’ll be dazzled as you pour over each fresco trace by trace until you’ve built up the whole picture.

If you’re already thinking it sounds like a fun trip, the best is yet to come! Having found out about the history of the removed frescoes you’ve just video mapped, next you’ll have the opportunity to see them first-hand!  A few metres from the church, you’ll find Espai Columba (Columba Space), a 250 m2 avantgarde building housing not only exhibitions of religious art from the country, such as the creu espinosa (thorny cross) de Sant Serni de Nagol, or the oil lamps from the church of Santa Eulàlia d’Encamp, among others, but you’ll also be able to admire the frescoes removed from the apse of the church in all their magnificence. Recovered in 2007 by the esteemed Government of Andorra, the frescoes have been on public display since March 2019.

Continuing the tour, head south until you get to the next stop on the itinerary: La Torre dels Russos (the Russian Tower). With a modern construction and traces of Noucentisme, this dwelling today remains a fine example of the country’s granite architecture. Built in 1916 on land owned by North American businessman Fiske Warren, the single-family house was inhabited for the most part by the Popoffs, a Russian couple who, fleeing the Bolshevik revolution, decided to settle permanently in the house. They not only lived there for a number of years, but they also ran the Georgian anchorage set up by Mr Warren. And that is how the house came to be known by its neighbours as the House of the Russians (Casa dels russos).

During your visit, you’ll not only immerse yourself in the extraordinary lives of the Popoffs, but you can also marvel at the house’s architecture. It was designed by one of the most renowned and prestigious architects in Andorra’s past, Cesar Martinell. In short, you’ll find yourself in a piece of real estate that has been part of the artistic and cultural heritage of Andorra since 2004.

Travel in time with the Margineda Site

Continuing on towards the south again, you get to the settlement of Margineda, a curious hamlet home to one of the most spectacular archaeological sites in the Pyrenees: Roureda de la Margineda. With an excavated area of 1500 m2, there are still 3000 metres left to discover! You can see medieval finds from different eras, from the Bronze age to the end of the 19th century. A settlement of five houses particularly stands out, offering one of the earliest examples of the way of life in medieval Andorra. You’ll be amazed by all the bronze, iron and ceramic objects at the site!

If you’d like to find out a bit more, don’t miss the guided tour of the fortress of Sant Vincenç d’Enclar, owned by the Viscount of Castellbò and built in 1190. Book your time slot now to discover all its secrets!

Once you’ve visited the site, continue until you reach the Margineda bridge, one of the most iconic and distinctive in the Principality. Located in the middle of the Camí Ral track, which connected the towns of Andorra la Vella and Sant Julià de Lòria, it was built in the late 14th and early 15th centuries. With a length of 33 metres and a 9.20 m horse arch, it has the distinction of being one of the largest and slimmest bridges in the Principality! Built with stones from the River Valira, dragged through the water to the building site, it has pumice stone voussoirs, lightening the structure a touch.

Having completed the entire historical and cultural part of the itinerary, now is the time to let off some adrenaline! What better way to do just that than by hopping on a bike, skating or enjoying some snow on the indoor slope. This stop takes you to the FREESTYLE 360 EXTREM CENTRE, where, as its name suggests, you can practise any of the centre’s activities freestyle, whether it be trampolining, parkour, skateboarding, BMX, etc. You’ll have access to facilities perfectly set up so that you can let your imagination run wild. The only limit is you!

Finally, we’d like to mention that in Andorra we’re very aware of the need to look after the environment, which is why we’re constantly looking to install more and more facilities and activities using renewable energy. Thus, at this last stop on the itinerary, you’ll be introduced to the first of four wind trees installed in the Principality. Located in the middle of the avenue, you can observe how its foliage moves, generating wind power. You’ll be surprised not only by its delicate and passive movement, but also by the unusual structure and colours used in the construction, which make it look almost like a real tree!

Be seduced by the charming village of Santa Coloma! 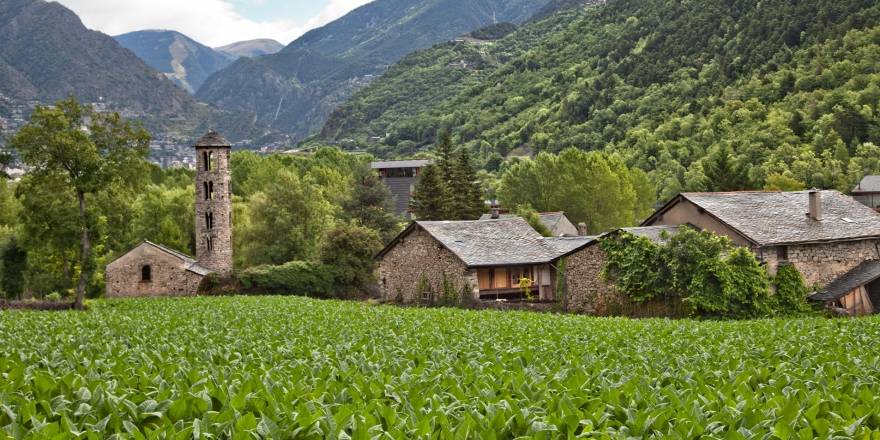