Sant Miquel d'Engolasters Church is undoubtedly one of the most beautiful examples of the Romanesque style in Andorra, which is home to some 40 of these medieval buildings. Located in the parish of Escaldes-Engordany, the church features a unique architectural style as well as valuable paintings and sculptural decorations. Here you’ll find more details about its history and style that will help you admire this great religious temple even more.

The history and architectural elements of Sant Miquel d'Engolasters

The construction of Sant Miquel d'Engolasters dates back to some time in the 12th century, at the height of Romanesque art in Andorra, a period in which other churches in the country, such as Sant Joan de Caselles in Canillo, were also built. The building’s architecture retains most of its original features, with some later additions such as the portico. It’s also an example of the classical floor plan of Andorran Romanesque churches: rectangular with a nave, semicircular apse, a gable roof and bell tower. The contrast between the height of the nave and the bell tower, which measures some 17 metres or 55 feet, is another surprising feature.

One of the great attractions of Sant Miquel d'Engolasters are the paintings and sculptures you’ll find there. In fact, the semicircular apse is decorated with a fantastic mural, by the Master of Santa Coloma during the 12th century. It is a Maiestas Domini surrounded by a tetramorph in which the Archangel Michael, patron of the church, merges with the symbol of Saint Matthew. The original painting is kept in the National Art Museum of Catalonia (MNAC), and what you can see on display in this church is an exact replica. If you’d like to get a taste of what it’s like, Google Maps can offers a high-quality 360º photograph of the church. The rest of the interior of the nave is typical of the simplicity and humility of Andorran churches of the period, with a wooden roof and white plaster on the walls. Moreover, from the outside you can admire one of the few examples of Romanesque sculpture still preserved in Andorra: the sculpted heads at the top of the bell tower between the arches of the mullioned windows.

You can visit Sant Miquel d'Engolasters for free, and in the summer period, you can enjoy guided tours. The church is located off the CS-200 road, and be easily accessed by car or bicycle. You can also use public transport to get here, as lines 2 and 4 of the Andorra Tourist Bus stop right at the door. And if you want to include this visit as part of larger route, you can venture into the nearby Madriu-Perafita-Claror Nature Park, declared a World Heritage Site by UNESCO, in the category of cultural landscape. For more information, you can visit the Escaldes-Engordany Tourist Office. 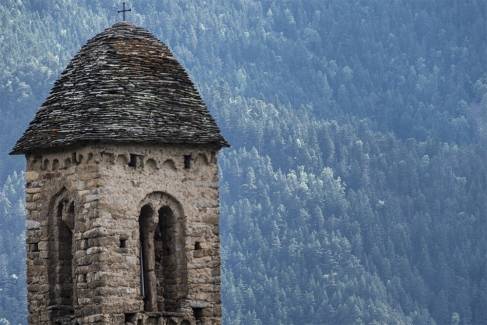 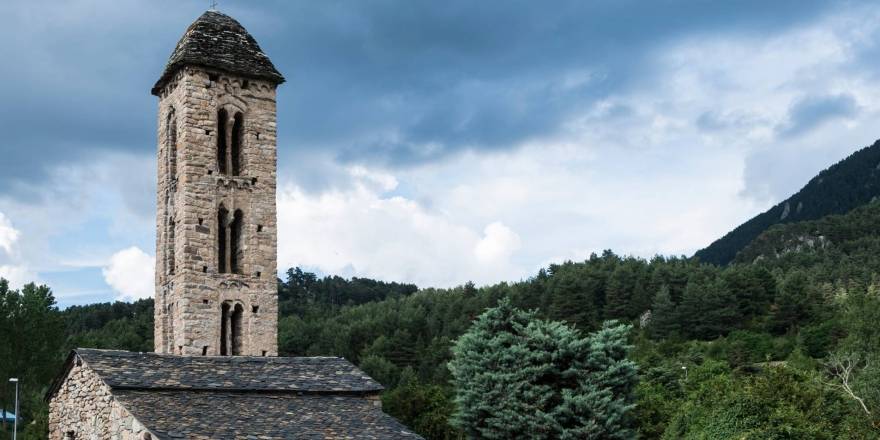