With its origins in Canada, this activity first appeared in the year 1900, in Saint-Claude, Manitoba. It was the favourite game of the workers in their free time, and consisted in hitting a small football with corn brooms, which lead to its name, “Ballon Balai” (or “Broomball”).

Rules of the game:

The sport of Ballon Balai is very similar to ice hockey and so it is played in the same rink and has similar rules and tactics.
The game is played between two teams of 6 players. Each player has a stick of wood or aluminium with a maximum length of 1.35 m and which ends in a fan-shaped head (simulating a broom), and there is also a “puk”, which is actually a ball with a diameter of around 10 cm.
The winning team will be the one that scores more goals than their opponents!

As in ice hockey, since it is played with a form of stick and on such a hard surface, you will be provided with all the necessary equipment: gloves, helmets, protective clothing, etc. You just have to wear comfortable clothes – leggings and a T-shirt are recommended – and a pair of hiking boots, so that you don’t slip every time you try to play!

Put the finishing touch to a great afternoon of fun by booking your dinner at the Palau de Gel. You just have to confirm your reservation and everything will be waiting for you!

This activity will be available only on Wednesdays and Fridays, from 9:30 p.m. to 10:30 p.m., and you can do it with friends, colleagues from work, or with your family, since it is an easy sport to play and can be enjoyed by both kids and grown-ups!

How about giving it a try? 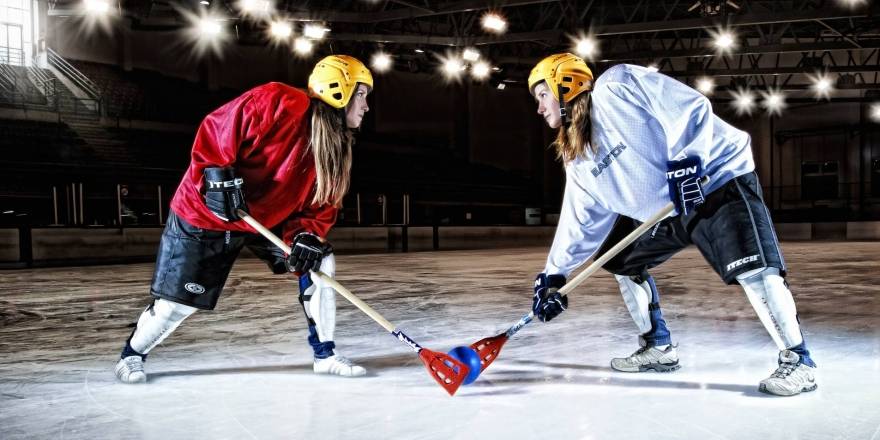