Dry stone architecture has become more prominent and relevant since the end of the 20th century, thanks to several studies and research promoted by the Cal Pal social and cultural centre.

This type of construction is an important element in our natural landscape, given its use throughout history. From Neolithic times to the 20th century, dry stone construction has been part of a long tradition. Besides its apparent simplicity, it also conveys solidity and durability, giving a unique personality to many places throughout the country.

In Andorra, this construction technique as been used from the bottom of the valleys in elements linked directly to agriculture, right up to the high-mountain passes, where its use is connected to animal husbandry. The Principality is home to a large number of constructions, from walls, terraces and paths to huts, all silent witnesses of how the hands of humans have shaped the appearance of the landscape through the simple use of stone.

Cal Pal
This centre is located in the house of the same name in the village of La Cortinada (Ordino). The Cal Pal centre's mission is to promote the reflection on identity, origins and the natural and cultural heritage of Andorra. Its first line of work is related to dry stone construction. This topic comes under the organisation's ideology as it connects the mountains with the cultural and natural landscape.

Cal Pal is one of the most representative examples of native Andorran architecture. Of unknown origin, there is written evidence that in 1435 it was donated to the Pal family. Several extensions were completed in the 16th and 19th centuries. Restoration and reconstruction took place at the end of the 20th century, restoring its definitive appearance (which had undergone some changes in the past). In 2011, it was included in the General Inventory of Cultural Heritage of Andorra.

Dry Stone
The dry stone technique consists of binding or stacking stones without using mortar that may compact them. Large and small rocks are fitted together by the force of gravity alone and the skill of those who manoeuvre them into position. This ancient system has the great advantage of being fully adapted to the needs of the landscape in which it is found. In Andorra, the raw material is easy to come by, as evidenced by the scree found in the valleys, on mountain slopes or river beds.
Orris (dry stone hut complexes) are one of the most characteristic and significant elements of this type of construction. Their origin lies in the Andorran animal husbandry tradition. They are constructions built by groups of shepherds which include various elements such as cabins, folds (small livestock yards) and even in some cases munyidores (corridors in which to gather and choose sheep for milking).

Routes
Currently, from Cal Pal and through the Primera Pedra (First Stone) project, you can explore a couple of routes that will allow you to discover this part of Andorra's architectural heritage. (Due to the exceptional situation this summer season, please check activity availability before your visit by writing to: contacte@primerapedra.com)

Route 1: La Cortinada to Sornàs
An almost 6-kilometre route starting with a visit to Cal Pal. Next, from La Cortinada you get to Sornàs via Ansalonga, visiting several points of interest, including the La Cortinada nature centre. The excursion includes a mountain lunch in Planes de Sornàs. Duration: 4 hours; distance: 5.81 kilometres, with an elevation gain of 370 metres. Difficulty level: medium-low.

Route 2: Els Orris to Encamp
This is a slightly more challenging route, at a little over 12 kilometres. You'll visit eight orris, dry stone hut complexes, all located in the parish of Encamp. The Vell, Emportona and Encerera orris, currently being reconstructed, are some of the highlights. The route is linear and has three access points: Cortals and Grau-Roig at each end, and one in the middle by taking the Funicamp lift, giving you the option to do part of the route. Duration: approximately 6 hours; distance: 12.3 kilometres, with an elevation gain of +/- 650/651 metres. Difficulty level: medium-low. 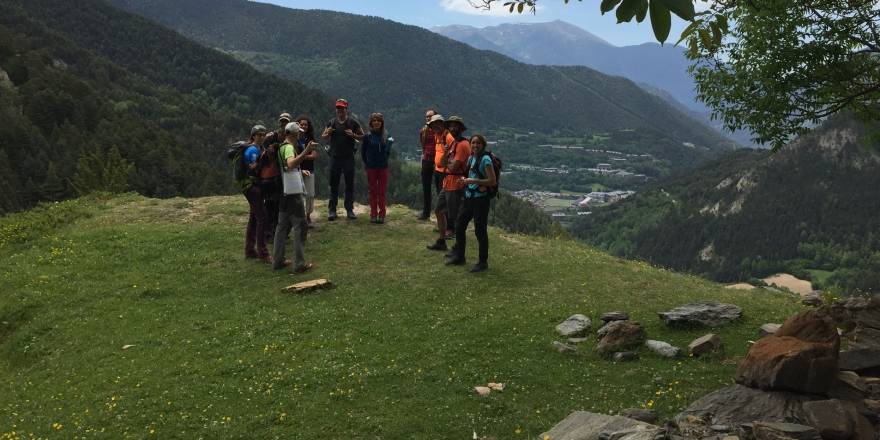