CULTURE > A tour of Sispony and Anyós, two quarters in La Massana

A TOUR OF SISPONY AND ANYÓS, TWO QUARTERS IN LA MASSANA

Sispony and Anyós are two of the seven Quarts (the name given to the administrative subdivisions) into which La Massana is divided. The parish of La Massana is located on the western side of the Principality and is also made up of six other towns.

Take this fascinating tour and be amazed by the culture, the church and the local products of these two absolutely charming towns.

Upon leaving La Massana capital, head towards Sispony, where you can enjoy three fascinating visits. You’re sure to be delighted not only by the artistic architecture of each building, but also by tasting some of our local gourmet products!

We’ll start in Sispony, visiting the iconic Casa Rull Museum, one of the most important houses from the Andorra of yesteryear. Here, you’ll gain an insight into the life of wealthy farmers who owned much of the land and crops, as well as a period in which agriculture and livestock were the basis of the Andorran economy. Dating back to the 17th century, the house was remodelled two centuries later, after being damaged by a fire in the attic. Despite this, much of its original structure still stands, along with various personal objects, which give testimonies of family life in the home. A visit to the museum is complemented by an audiovisual guide which, together with the interpretive signs during your visit, will take you back in time to a period in which heirs, heiresses and knights lived in the house.
Sant Joan de Sispony Church

Continuing the tour, head to Sant Joan de Sispony Church, a place of worship with great historical and architectural value, declared a Site of Cultural Heritage in Andorra in 2003. Built on an ancient temple from medieval times, the church was built using religious-style architecture in 1641. Facing east, inside you’ll see various artistic displays that are sure to amaze you. These include a restored carving of the patron saint of the church, Saint John, from the Gothic period, as well as one of the Virgin Mary (dated somewhere between the end of the 15th century and the early 16th century), accompanied by one of only two examples remaining in the Principality of an altarpiece made from polychrome-painted and embossed leather. At the moment, you’ll also find some paintings by Josep Oromí, an artist who also decorated other churches in the Principality.

Delight your palate at El Pastador

On leaving the church, head towards the Andorran micro-producer El Pastador, located just a few metres away. There you’ll be able to taste delicious jams, preserves, jellies and chutneys, all 100% authentic, homemade products! With their tradition handed down from generation to generation, El Pastador offers a wide range of recipes made from top-quality ingredients. Among their selection, you’ll be able to taste sweet creations, such as blackberry jam or orange marmalade, or, if you fancy something different and original, you can also try their spicy roasted red pepper recipe, or their sweet and sour onion jam, among many others! As an added detail, thanks to the dedication, passion and professionalism demonstrated over the years, Casa Joanet or El Pastador has been awarded three internationally-renowned prizes in The World’s Original Marmalade Awards!

A unique church in Anyós!

Once you’ve tasted the delicious preserves at El Pastador, it’s time to continue your cultural tour! Head to the town of Anyós by car. The town is on the other side of the capital and has one of the most symbolic churches in the parish. Built in the 12th century on a small plateau, the church still retains much of its Romanesque structure. Similarly, thanks to its strategic location, you'll enjoy incredible panoramic views of the valleys of Escaldes-Engordany, Sispony, Ordino and the capital of the parish, La Massana.

As for inside the church, you’ll be able to see frescoes such as the representation of the Holy Supper (dated to the Franco-Gothic period); the Passatge de les Ànimes de Sant Miquel (Passatge of the Souls of Saint Michael); and the representation of the patron saint of the church, Saint Christopher, both from the 13th century. Finally, you’ll be able to observe the 16th century altarpiece, also dedicated to Saint Christopher, depicting various scenes of the miracles and life of the patron.

Don’t miss this tour and have a great time enjoying a cultural experience with your family and friends! 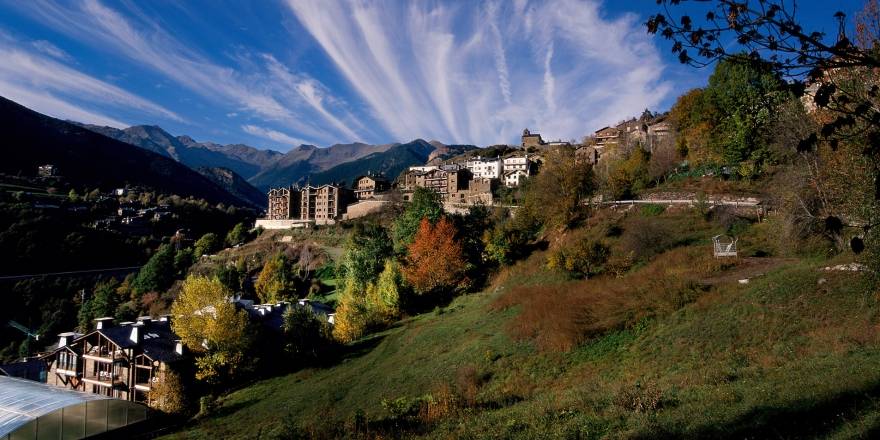