The most popular cycling race on the planet is coming back to Andorra, with a stage finish in Andorra la Vella and a stage start in Pas de la Casa.

Le Tour de France, the most important and prestigious event in the international stage race calendar, will be arriving in Andorra on 11 July. The route for the 15th stage, which will start at Céret, the capital of Vallespir, will enter Andorra via the Pas de la Casa border, before crossing the Port d’Envalira mountain pass (2,409 m) -the roof of this race edition- then heading down towards Soldeu, Canillo and Encamp. At this point, the competitors will cycle along the Collada de Beixalis mountain pass (1,790 m), then go down through Anyós towards Escaldes-Engordany, before arriving at the finish line in Andorra la Vella.

The relationship between "La Grande Boucle" and Andorra has a long history; this will be the second time a stage of the Tour has finished in Andorra la Vella. The country’s capital also hosted a stage finish in 1964. It was also the stage start point on three different occasions: in 1993, 1997 and 2009. Arcalís, meanwhile, has hosted a stage finish in three editions– 1997, 2009 and 2016 – and Pal, just once, in 1993. Escaldes-Engordany marked the start of a stage in 2016.

All cycling fans must pencil in a trip to Andorra on their calendar next July. Come and enjoy the atmosphere of the race first-hand and witness the best professional cyclists on the international panorama in action. For three days, Andorra will become the world road cycling capital, thanks to Le Tour de France!

Further information on road closures in the Principality and restrictions along the roads of Andorra la Vella is available by clicking on the following links (under the map). 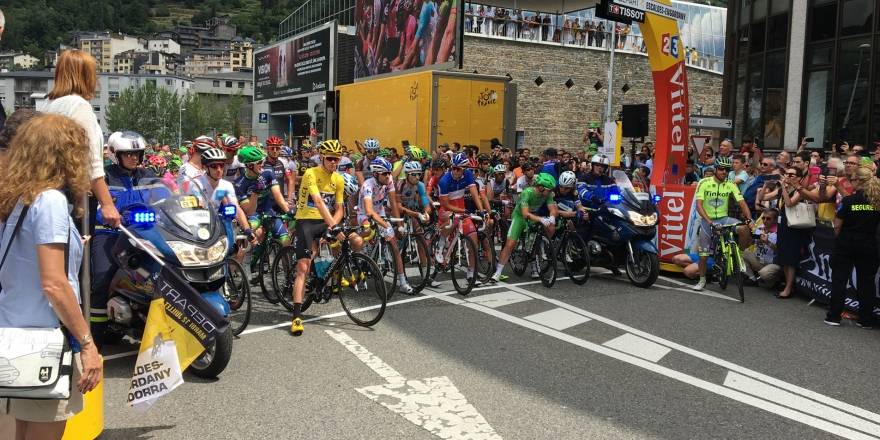